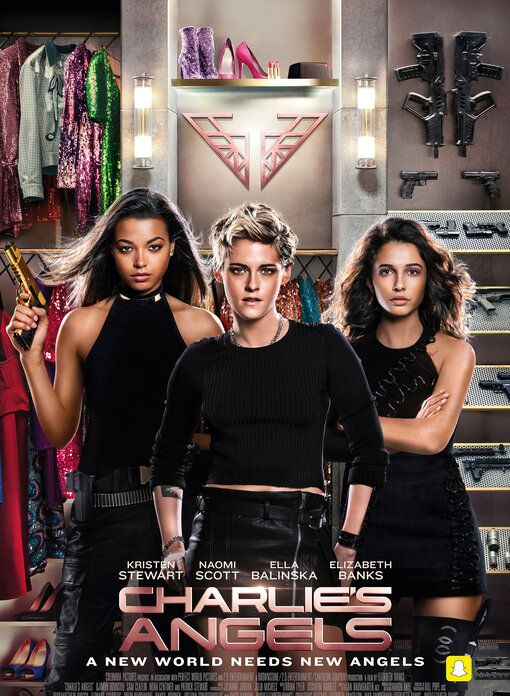 Charlies Angels was always known for its feminism, Sisterhood, and Glamour, a franchise that made action acceptable for females on screen, Charlies Angels was first premiered as a TV Series in 1976, Aaron Spelling creation proved to resistant network heads that audiences really would show up for a women-led hour-long series, and it did especially focusing on the women more than the storyline.

In 2000, the show was adapted into a movie, this to me gave a whole new light to the movie, especially in terms of entertaining action, comedy and a great girl star cast! From drop-kicking Drew Barrymore, Cameron Diaz, and Lucy Liu. I was in my teens and to me, this movie really radiated girl power and the best part made all the action sequence unforgettable. Then came the 2003 Full Throttle, which to me was almost the same storyline with a lot of explosions, and bombed at the box office, disappointing for me as a Charlies Angel fan…

Now, the Angels are back on the big screen, and in true 2019 fashion, they’ve been given a girl-power makeover, for me they could’ve done better with the fashion sense, ( I guess it’s my inner fashionista critiquing) The cast is younger this time, The basic idea of Charlie’s Angels remains the same — three women fight crime as part of a private organization owned by the mysterious figure of the title, one who’s only ever heard on speakerphone.

Charlie’s Angels is directed by Elizabeth Banks, she also appears in a supporting role as Bosley, the leading of the film’s many Bosleys (the Townsend Agency has gone global).

Stewart, as the carefree Sabina, and newcomer Ella Balinska, as the no-nonsense Jane, are the established Angels, while Scott, well known from the recent movie Aladdin, is an engineer named Elena that they’re assigned to protect. Elena works at a company poised to unveil a pocket-sized source of clean energy that can also, inconveniently, be weaponized, something neither her condescending boss (Nat Faxon) nor their visionary CEO (Sam Claflin) wants to hear. When she attempts to blow the whistle, an assassin (Jonathan Tucker) comes after her, seemingly already informed of her whereabouts. There are betrayals, and disguises and an okay choreographed dance number, but the problem was there was something missing from the movie, in what should be a movie that’s mainly about it.

It could be due to a very young and inexperienced in action movies star cast, I mean if you’ve watched the early set of Charlies Angels Movies you would notice the main attraction was the mind-blowing action sequence, though the action in this movie was decent and good but definitely not mind-blowing as the earlier movies.

I do appreciate the fact that popular movies are now rebooted, and having a younger star cast definitely appeals and relatable to the younger crowd, the movie is worth watching, especially if your a Kristen Stewart and Naomi Scott fan, seeing them in action here is entertaining.